Once again the Liberal press is echoing the sentiment that President Trump is our version of Adolf Hitler, ready to take over the Republic in all manner of malevolent ways and totally destroy our democratic experiment in the USA. [Disclaimer: I am a centrist Liberal to be sure. My sentiments and beliefs are mostly on the Liberal side. As a physician, I have long favored, for instance, a single-payer healthcare system. But I am pro-military, and come from a largely a military family. I believe in civil rights, women’s rights and personal responsibility, accountability and not graft etc. I could go on but I am sort of political melange based on fairness and education among other values.]

The name of Hitler could very well be a flashpoint type stimulus for me. I am a Jewish convert which is a long story but arises from my experiences as a youth in Israel due to my father’s work which took our family there for several years. I also inherited the anti-nazi view of a family who served in World War II through multiple past relatives of my parents’ generation including female members, and which sustained losses in WWII.

As a psychiatrist, I ruefully witness the hair on fire reactions that I still consider and hope are overreactions on the part of the very Liberal media for instance, to President Trump and which continue to decry many of his misplaced, goofy and erratic social and political actions in the light of an evil dictator such as Hitler. We have had a few published efforts by psychiatric authors to publicly demonstrate by diagnostic exercises in print that President Trump is our own Hitler. The most notable book that has established this pattern and line of thought is the collected essay book by Bandy Lee MD a lady psychiatrist at Yale, The Dangerous Case of Donald Trump: 27 Psychiatrists and Mental Health Experts Assess a President. 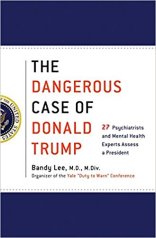 This volume became a very good seller and has been quoted and referred to by many commentators since it came out over a year ago. The primary author and editor of the multi-author book has continued to pronounce Trump in the media and meetings as an extreme threat by virtue of her now very well publicized view of him as an extremely disturbed person unfit for the Presidency. And this has had the predictable effect of giving the truly anti-Trump crowd,  intellectual justification for labeling him as now fully diagnosed as mentally dangerous to the country.

The controversy in the mental health professions, especially psychiatry, has spawned almost a new cottage industry of psychologizing and diagnosing by anyone who has enough nerve and/or a widely enough recognized name in popular American culture. This is my mind is the greatest danger that the “Goldwater Rule” of the American Psychiatric Association spoke to in making diagnosing public figures a forbidden ethical transgression for the psychiatrist. 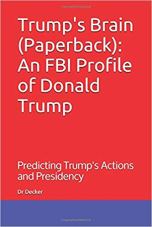 We now have a few books that take on this seductive and publicity garnering foray under the authorship of anonymous writers. The first book I came across in this genre is Another intriguing book has been the small almost pamphlet-sized book by an anonymous “Dr. Decker:” Trump’s Brain (Paperback): An FBI Profile of Donald Trump: Predicting Trump’s Actions and Presidency.

I am old enough to have lived through the late 1960’s and 1970’s as a young student. I saw all the civil unrest of those times. The Liberal segment of the nation and the more publicized ultra-radical Left saw President Nixon and his administration and political as the intellectual and political AntiChrist. Their reactions to him and vilifications of him were extreme, to say the least. Nixon was portrayed as a fascist, and dictator in the making. It turned out that Nixon did have at least some antisemitic views which were not well known at the time. But Nixon did not make the degree and depth of threats to American institutions such as the press and the Courts that President Trump has carried out so far in his Presidency. But it is history now well established that Nixon started many of the right-wing tactics such as the Southern Strategy, coded [hidden linguistically] racism intentions and ways of speaking politically, dirty tricks of campaigning, attempts at intimidating the press, etc. Back then in the Nixon era, the Left screamed constantly that the end of the Republic was at hand and it did not turn out that way. Even in my youth, I was buttressed with an international view of despots and knew that Nixon was not such. I had lived in a few such countries overseas and had my father’s wise WWII based perspective on what a dictator was. Somehow I knew that the Nixon crowd would totally self-destruct. It helped on a personal note that my father was an Eisenhower Republican and had a dim view of Nixon and had him ‘pegged’ all along.

In those days watching Nixon and the Watergate hearings the last year of his Presidency, I had the view that such character disorders, caused their own destruction. I saw the seeds of Nixon’s political demise and was relatively untouched by the near political hysteria that engulfed me at that time. I lived in one of the most Liberal areas of the country and most of my friends were far more liberal than I was. Now I live and have basically since I left that area in 1974, in a thoroughly and historically very conservative area, locally and regionally. Liberals are few and far between hereabouts. I do not see conservatives as the personification of the Devil. I was exposed to the conservative working class all my youth in different parts of the country due to my father’s migratory profession that did not take us to bastions of Liberalism…

Now to the diagnoses that have been popularly [n both senses of the word I might add somewhat tongue in cheek] assigned to President Trump:

sociopath [the nonscientific term for the above term]

megalomaniac [also not a real term but a literary, descriptive one]

And of course, all the words denoting a dictator: despot, tyrant, etc.

I shall offer a generic list of the popularly ascribed traits of the sociopathic personality disorder since that confluence of personality entities seems to be the leading ‘consensus’ of all the recent Trumpian pseudo psychiatric ascriptions:

All I can say at this point in this post is that for those who accept and believe Trump, he is none of these things, while for those who do not endorse or accept him as he is, he comes close to conforming to many of the above kinds of behaviors and is supremely dangerous to the Nation. But to me, the task is to keep my head from being overwhelmed with the emotion that swamps critical thinking around the figure of Trump, and state the kernel of this post: However Trump’s personality traits define him, he is not Hitler.

I know, and can hear through the WiFi ‘wires’ the protests of the readers who think Trump has already started these kinds of heinous anti-democratic and ‘diabolical’ maneuvers, but I think our extremely well established political and social institutions in this country are already pushing back in their stolidly resistant to change properties to oppose such. I feel confident that the military’s leaders have been quietly channeling Trump’s hairbrained ideas away from all-out calamitous consequences all along. This is not to say Trump has not goofed already in such circles. My point is that I do not think Trump is Hitler, nor will he be able to destroy our country and its institutions the ways my hair on fire very Liberal friends do.

I could be wrong but I do not think so.

I have been out of commission for several months now on medical/surgical leave from my work as a psychiatrist and about everything else, weathering reparative surgeries, elective very aggressive interim chemotherapy to more than ever insure continued remission. But finally I am bringing all this to a close, regaining energy, able to use my arms and forearms each week (that prevented almost all typing, computer work, even holding books etc.) and can start devoting myself to my publishing and commentary efforts, though mostly using dictation software to digitize my thoughts on the viewable gizmos of our age.

I have thought a great deal about the growing chorus in the citizen media concerning the temptation (a pointed characterization on my part of this phenomenon) to diagnose our new President, Donald Trump. The President has perhaps unwittingly on his part, for the most part, demonstrated public behavior that has drastically broken nearly every unwritten” rule” or traditional expectation of political behavior and leadership script of our American Presidents literally since the earliest independence days of this country. In brief, I will summarize some of the customary channels of behavior that we have come to expect of our Presidents. Granted my grasp of this is not nearly equal to that of a true historian of the American  Presidency. But I have read a number of presidential biographies and viewed many tv documentaries since my childhood of American Presidents. These two sources of information have given me at least more than a modicum of background data on the almost “institutional’ behaviors of Presidents. So I think that I do have at least a moderately well-grounded foundation for offering several “behavioral mores” that devolve upon American Presidents.